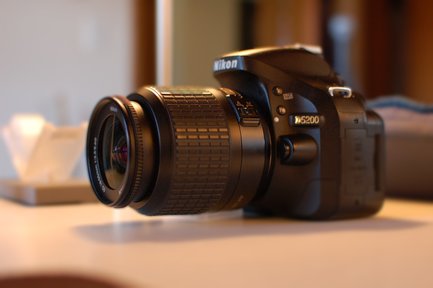 The Nikon D5200 is definitely one of the best "bang for your buck cameras" and I love it. It has an articulating screen so you can take shots at different angles, it's a Nikon DX-format camera, it can record video at 1080p 60i, (however it does have a huge crop, so I use 1080p at 30fps since it has less of a crop.) and it takes insanely crisp photos that look professional. Although it is meant for more intermediate photographers, I think pros could find many of it's features useful in professional photography. If you're just starting, flip the dial to auto, and you're set to go! But if you want to step it up a notch, go to the P, A, S, or M modes. P, programmed auto, is a little step up from just auto, allowing you more control depending on what type of photo you want to take. Then there's A mode: aperture priority mode. This makes you set the aperture and the camera figures out everything else out for you. Even ISO if you're in auto-ISO mode. Shutter priority mode allows you to set your desired shutter speed while the camera sets all the other settings to match what you want. And then there is my favorite mode, manual. This gives you FULL control of the camera and doesn't get in your way. You can still have auto-ISO if you're lazy, but most people would turn that off I imagine. This camera was like $500 when it first came out, and since then Nikon has made the D5300, and the D5500, as well as the D5600. All of these cameras are basically the same with only small increments of improvements. The D5200 is the best one for your money since I got mine for $300 used off of Amazon.

The 18-55mm in the picture above is now broken, but I have a new one now with VR and whatnot. I also used to have a Macro that I lost. I did rent a 18-200mm, if you were wondering, and I borrowed a 18-105mm. But I don't own those. I will get more, but for now, this is all that I have. Anyways, let's talk about it. It is a great lens. It is a bit squeaky when it comes to focusing, but overall, it's great for portraits and macro. Because it can go to f/1.8, it has great depth of field, and it is very very small. Because it is a prime lens and cannot be zoomed, it can produce very sharp images, especially if you're taking close-ups of flowers and objects. It's also super light and portable, and is what I bring when I don't know what is coming next. This is because 90% of the time it is the only lens that I have in my possession. One thing I don't like is the crop factor since it makes it not so good for video shooting. It isn't a VR, (Vibration Reduction) lens, so sometimes your photos don't turn out as crisp as you think they ought to be. Overall, I would give this lens a 9/10.

I got this lens for Christmas 2017, and I now use it for most things like video. (I make YouTube videos) It's a good first lens, and if your buying any camera, this is most likely what's gonna come in the box. That is unless, you get a camera body only. Anyways, I haven't had a ton of time to go out and actually SHOOT with this lens, so here are my brief thoughts:
It has good autofocus, usually it takes a bit of time for it to actually focus, but it works. It's pretty sharp and I really like it for video. It is almost the PERFECT lens for video. Although I have two complaints for video. 1) It has a really loud autofocus noise, if you watched my first video shot on my D5200, you can hear the lens going crazy with the autofocus. It's SO loud in fact, that even with a Rode VideoMicro external microphone attached to your camera, it still gets picked up.
2) The autofocus on all Nikon lenses, including this one, have terrible focus in Live View and while shooting. It's so bad that I thought about buying a *cough Canon once. But besides these setbacks, it's a good first lens, and unless you don't have anything more expensive or better, then don't bother. This lens get a 6/10 on my list.